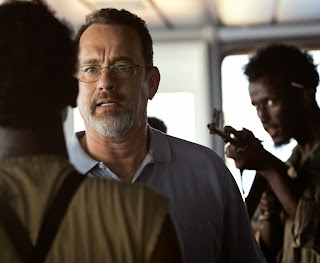 What makes us want to see a film? The story or the star? Ideally, it's a combination of both. In this case, at least for me, it was to see Tom Hanks. He strikes me as a man of action, compassion and human decency. Someone who stands tall in the pantheon of great Hollywood actors.

CAPTAIN PHILLIPS is allegedly based on the true story of a Captain of a freighter bound for Mombasa which must pass through Somalian waters infected with pirates. Phillips and his crew is held under the threat of death unless the ship's owners pay millions of dollars in ransom. Tense? You bet!

Unfortunately Hanks would be better cast as Captain of a cruise ship sailing calm Caribbean waters.

A predictable drama unfolds about oppressed hostages featuring Captain Phillips as the centerpiece of the opposition. To enhance our compassion for Hanks, director Paul Greengrass shoots overly long close-ups to inspire audience sympathy as Hanks cries out in pain as he suffers a life threatening wound. The shot is milked.

This throws the film off center and suddenly seems like a grab for an Oscar worthy performance. Alas it doesn't work. 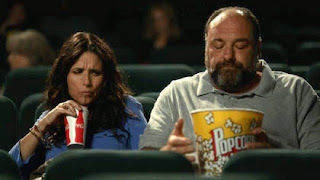 Please God, if the clunky fat man and trim vulnerable younger women strip naked and make love on camera my mind will short out trying to figure out how they do it.

Am I being shallow or judgmental? Perhaps. But considering that there is no genuine chemistry between a television sitcom actress and an iconic mobster/killer dramatic actor, the reader may forgive my concern.

This film seems based upon a script-driven rom-com sabotaged by misguided casting.

We all miss the abrupt passing of Gadolfini, particularly as we discover his depth and effortless approach to creating laughter. If only this film offered a more intuitively skilled female partner it would be a memorable send-off for a great actor. 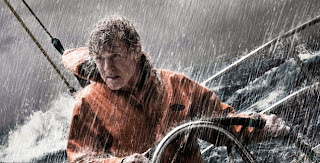 A film without words. A sea without mercy. A man alone. His survival at stake.

Our Man (Redford) writes a note of regret and love, stuffs it in a bottle and surrenders it to the ocean.

We wait. He hopes. Busies himself with tasks aboard his single-masted 39-foot yacht. With him we wait as well. The sea becomes restless. Its punishing force overwhelming, Our Man, alone. Will hope override despair and life-threatening danger?

Director/Writer J.C. Chandor creates a metaphor for survival at sea channeling Melville and Hemingway with a gripping story told without words. We are left to fill in the verbal void with our own monologue. Will or won't Our Man live?

At story's end we are given the option to provide our own conclusion. The result gives us a new way to participate. Our eyes and heart figure into our perceptions.