Unlike Martin Scorsese’s one-note, 80’s inspired, THE WOLF OF WALL STREET, David O. Russell’s AMERICAN HUSTLE delivers a stunningly layered and riotous send-up of a 70’s political and monetary farce that flies off the charts.

While Scorsese offers charmless takes on loathsome characters, Russell reveals women and men, equally corrupt, who give us the paradoxical pleasure of caring about them even as they seek to grab and run.

A brilliantly crafted script and a splendidly directed cast pull off one of the best films of the year. Why? They play farce with a straight face.

Christian Bale is nearly unrecognizable as Irving Rosenfeld, a local con artist with a glued on hairpiece and a dry cleaning business that manages to amass a vault of pricey but unclaimed items.  Irving declares that customers must have gotten drunk and totally forgotten where they left their silks and furs.   Oh, he also sells fake fine art.  Imagine that.

Into his life slinks Sydney Prosser (Amy Adams), a former stripper who seems to have totally forgotten her bra as well as her moral scruples.  Imagine that.  She’ll do anything to become someone other than who she is.  I mean was.  Bingo.  Irving strikes her as the perfect match. Two of a kind.  They’ll get rich and toss in hot sex to seal the deal.  Irving drapes her in unclaimed Halston’s and minks.

Sydney obligingly transforms herself into Lady Edith Greensly, a well-connected English woman with amazing financial connections. Together she and Irving set up a loan company that promises to deliver $50,000+ in funds to any desperate sucker willing to pay a $5,000 retainer up front.  Somehow the duo never manage to keep their part of the bargain.  But boy, do they ever get rich.  And the sex is great.  Imagine that.

Russell hints that things do not always turn out the way they seem.  An enticing understatement. Misguided Commerce and Lust now drive this delicious farce forward.

Enter desperate loan candidate Richie DiMaso (Bradley Cooper) who in reality is an FBI agent.  He threatens to bust Irving and Lady Greensly unless they use their con artist skills to help him execute a plan to ensnare politically ambitions Carmine Polito, Mayor of Camden (Jeremy Renner, stylish in a grand pompadour), who is eager to generate work for his job-hungry voters of New Jersey.

For that to happen, Polito will surely have to secure millions in tainted money.  It's the perfect scam.  DiMaso will make a highly publicized bust and receive career boosting kudos from his FBI boss. Yes?

Ah, but remember, we are enjoying a farce.  Enter a fake Arab sheikh who proposes to invest millions (provided by the FBI) in the casinos.  A mobster from Miami unexpectedly arrives (Robert De Niro) anxious to invest in East Coast gambling. Then there are the U.S. Congressmen who eagerly accept large bribes to grant the sheikh American citizenship to mask the mafia investment.

Speaking of loose, into this mayhem intrudes Irving’s wife, Rosalyn, unknown to mistress Lady Edith, who quickly proves she is definitely not a lady.  Oh the cat fights!  Rosalyn (Jennifer Lawrence channeling a wacky version of Judy Holiday ) develops a crush on a mafia hit man and talks too much which causes poor Irving to get seriously roughed up.  But the audience can't stop laughing.

Go see this film.  It's a perfect farce with a kick ass ending.  David O. Russell and team deliver a ludicrous and sophisticated black comedy that I’m confident will deserve the many awards coming its way.
Posted by E. Randahl Hoey at 12/27/2013 10:25:00 AM No comments:

The Wolf of Wall Street

Fasten your seat belt. Director Martin Scorsese, seldom a master of understatement, delivers a legs-splayed, in your face display of rip-snorting, and I do mean snorting, excesses in the life of the penny stock con man Jordan Belfort during the get rich financial heyday of the late 80’s.

Consider this the most wild and full frontal send up of alcohol, sex, profanity and drug induced excesses shown recently in a mainline film rated R.

Is this a December 25 holiday film for the entire family? Sure, if it inflames testosterone driven 15 year old boys who seem to be Hollywood’s targeted paying audience. I’m wondering about the rest of us.

I laughed and cringed at Scorsese’s depiction of greed and carnal avarice as Leonardo DiCaprio, playing Belfort, reverses the Robin Hood mantra by stealing from the poor little guy and giving to wannabe rich Stockbroker bum-fucks.

Clocking in at nearly 3 hours, this endless sexcapade of excess left me searching for even a single character that I could remotely care about.

OK, maybe the boy scout FBI agent Patrick Denham, perfectly embodied by Kyle Chandler. He offered me a toehold into human decency but that was it.

Australian newcomer Margot Robbie makes a ravishing debut as a sexually voracious opportunist that stole my heart with her sensual vulnerability but rudely broke it as her character became an avenging shrew of demented proportions.

Endless immersion into a world of self-centered, me-me, bottom feeders – women and men alike -- caused me to leave the theatre feeling the need for a long, long cleansing shower.

The Secret Life of Walter Mitty

We meet Walter Mitty, via short story writer James Thurber, as a henpecked husband who is chauffeuring his wife to her hair appointment. Back then, 1939, men did that. Mrs. Mitty accuses her husband, driving at 55mph, of recklessly speeding. Walter is otherwise engaged.

In full dress uniform, Commander Mitty is piloting a Navy hydroplane as it hurtles through an icy hurricane. His wife's criticism is cause for astonishment and Mitty is brought up short. Who is this women?

74 years later, Thurber's story continues to resonate. Haven't we all found ourselves suddenly immersed in a fantasy in which we are the star character?

Ben Stiller has attempted to capture the universality of this phenomenon as director and star of his version of The Secret Life of Walter Mitty. I approached the film wanting it to work. Stiller is a talented director and actor. Unfortunately he has miscast himself in his own film. He plays the part earnestly and with such straight-on seriousness that we miss the engaging whimsy that James Thurber evokes in his original story.

The special effects are grandly executed. However, they veer into wow-land and often fall with a resounding clunk. Nice try. Kudos to Ben Stiller for giving us his best shot. Director Stiller just needed to tell leading man Stiller to lighten up. 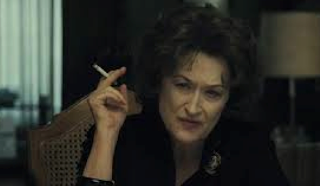 On stage, this Pulitzer Prize winner was one of the funniest and most disturbing plays in many a Broadway season.

Playwright Stacy Letts, from Chicago’s cutting-edge Steppenwolf Theatre, wrote a stunningly crafted story of a dysfunctional family coming unglued as they gather after the funeral of their patriarch.

Meryl Streep would seem to be an ideal choice to play the widow, Violet, suffering mouth cancer and chemotherapy, who deals with her pain and loss with booze and pills.  The result unleashes a torrent of abusive and angry attacks on all those around her.  Does this seem to have humorous potential? No more than Martha’s outbursts in Who’s Afraid of Virginia Wolf which proved riotous.  It depends on how it is played and how it is directed.

John Wells, coming from a TV Directing background, approaches the piece as though he were filming a faithful recording of the stage play. His camera is placed so that it often isolates and magnifies individual performances.

What often happens is that the leading players, particularly Meryl Streep and Julia Roberts, give stage worthy performances that are not nuanced for camera.

The result is overacting and playing for results which highlight the emotional hysterics but reduces the humor and the astonishing absurdity of the dialogue. This is neither the fault of the playwright nor the actors.

In an interview Wells mentioned that he and Letts trimmed the 3-hour stage script down to a 2- hour screenplay.  In doing so the original has been flattened and all that remains is overplayed melodrama.   If you expect to see a vibrant stage-to-screen adaptation of an extraordinary and prize winning play this is not it.