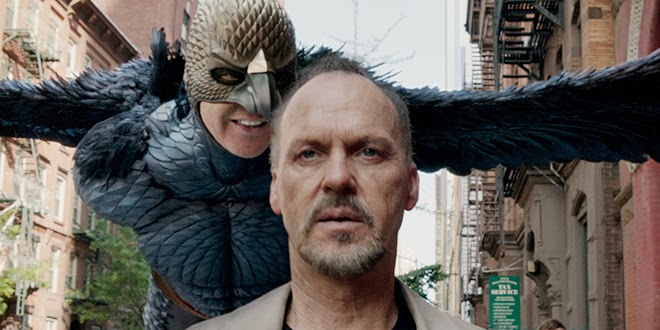 A comet flames toward earth on its way to burnout.  Or maybe it will crash in a fiery explosion.  But what a stunning cinematic opening to foreshadow the unpredictable and exhilarating trajectory of BIRDMAN.


Director Alejandro Inarritu and his screenwriting team craft a riotous black comedy about a stale but fondly remembered flying movie star-superhero, Riggan Thomson (Michael Keaton).  He is determined to relight his career.  Hey, why not move from film to theater?

Using his own money he brings a play to Broadway.  It’s title?  “What We Talk About When We Talk About Love”.  Riggan casts himself as the leading man and becomes his own director.  Ouch.  Is it possible a madcap farce based upon desperation is about to unfold?

Indeed. The high jinks and self-sabotage that foils Riggan’s comeback is not only wacky but also hallucinogenic.  The latter is inspired by an inner monologue coming from his fictional Birdman character.  That character hungers to reappear on screen.  Riggan resists.  However, he can’t prevent imagining he has telekinetic power to move objects in his dressing room.  And he can surely use his superhero power to fly high and wide above New York City.  After all, his star still soars brightly.  Right?

But reality sinks in.  The celebrity whore within Riggan presses prematurely for previews to begin.  However, tickets are not selling.  A bankable stage actor, Mike Shiner (Ed Norton) is hired which excites theater gossips.  Ticket sales surge.  Narcissistic Mike manages to argue, demand rewrites and challenge director/star Riggan at every turn.  Sometimes even during a performance.  Backstage tensions build.

Cinematographer Emmanuel Lubezki gives us seemingly unedited long shots that yank us into backstage hallways and dressing rooms and pull us deeper into the painful drama which is slammed against explosive comedy.

Emma Stone plays Sam, Riggan’s young daughter fresh out of rehab who is hired to be his production assistant.  She is spot on – addled yet sexy.  Lindsay Duncan nails her role as the salty New York Times theater critic who vows to destroy Riggan’s vanity production sight unseen because she hates Hollywood entitled actors.

Unnerved, Riggan inadvertently locks himself out of the theater and marches with blind determination through a gawking crowd to get back on stage through the front door.  He seems oblivious to the fact that he is naked except for his underpants.  It is a tour de force of comic chagrin and character revelation flawlessly edited to appear to occur in a single take.  Breathless reality is the result.

Resolved to dominate his Broadway opening night, Riggan puts a real gun to his head and pulls the trigger.  At least he will end his career with a bang (sorry).  Alas, Riggan’s flameout death eludes him.

He shoots his nose off.

Samantha comes into Riggan’s private hospital room.  The bed is empty.  She goes to the window.  It is wide open.  Has her father jumped out?  Or did Birdman leap upward and fly high?

We are left smiling.