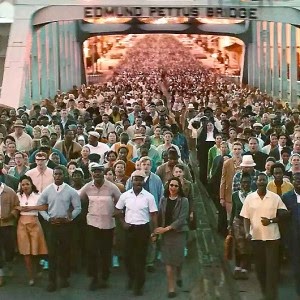 The uplift that SELMA delivers is preceded by the real and painful memories of what happened to sear this southern city into our easily trampled Pledge of Allegiance which concludes “. . . with liberty and justice for all.”

What gives her film its contemporary impact is that it documents a high risk protest, Martin Luther King’s involvement and the brutality of local police.  These are powerful emotional and political punches that yank us into the present.

It also reminds us that we are still stuck.

The push-pull of our own racial DNA remains alive and unwell.  DuVernay’s film distills our 200 plus years of black/white disharmony by focusing on a 3-month regional uprising in 1965.  The results are clearly viewed as a reminder that there was not just a single hero or villain who fueled Selma which ultimately caused President Johnson and Congress to enact new voting rights legislation.

DuVernay skillfully allows us to alternately identify with the oppressed rioters and infuriated  suppressors. We are put on edge.  Can order be restored or will civil disgust lead to civil war?

Today, consider those not charged with the shooting death of Michael Brown in Ferguson or the chokehold death of Eric Garner in New York.

Should we take to the streets?  Or not?  The Times They Aren’t a-Changin’.